Apple’s transition away from Intel processors to Apple Silicon for the Mac has, so far, been a stellar success, earning rave reviews even from the harshest of critics and skeptics. And yet some major Mac software makers have dropped the ball. What’s going on?

Nearly a month and a half later, some major apps have debuted on the M1, but the vast majority of those mentioned in our last feature remain without M1 support.

Mark Dahm, principal product manager for Photoshop, said in an interview with Computer World that Apple’s “significant investment in the developer toolchain and experience” made it a “smooth” experience for the Adobe team.

And even before Photoshop became M1 native, Apple’s Rosetta 2 code — which allows legacy Intel apps to run on M1 chips — bought Adobe some time. In Dahm’s own words, Photoshop in Rosetta was “running as fast, or even faster than on previous systems.”

Sounds like a win all around, right? Not so fast.

While Photoshop and Lightroom on the M1 natively are major milestones for Apple’s move to the next generation, there are a number of high-profile laggards that have yet to release native M1 apps. These include household names like Google Drive, Microsoft Teams, Dropbox, Skype, Spotify, Kindle, Trello, and Evernote, just to name a few.

And while Adobe has made strides, its most popular app — Acrobat, used for reading PDFs — has yet to see M1 support. InDesign, InCopy, Illustrator, After Effects and other key components of the Adobe family of apps remain reliant on Rosetta 2.

Photoshop’s M1 launch also has its share of issues, with key features like Quick Share and Preset Syncing not available. Known bugs also include exporting SVG files, and multi-app workflows like copying and pasting from Lightroom to Photoshop.

Power users might want to put an asterisk next to claims of native M1 support for Photoshop, in other words.

Even Apple itself doesn’t get away from this one unscathed: FileMaker Pro and Shazam — both of which are owned by Apple — still don’t support the M1 natively.

And longtime loyal Apple developers like CARROT and Readdle have yet to provide M1 versions of popular apps like CARROT Weather and Spark email, even in beta. 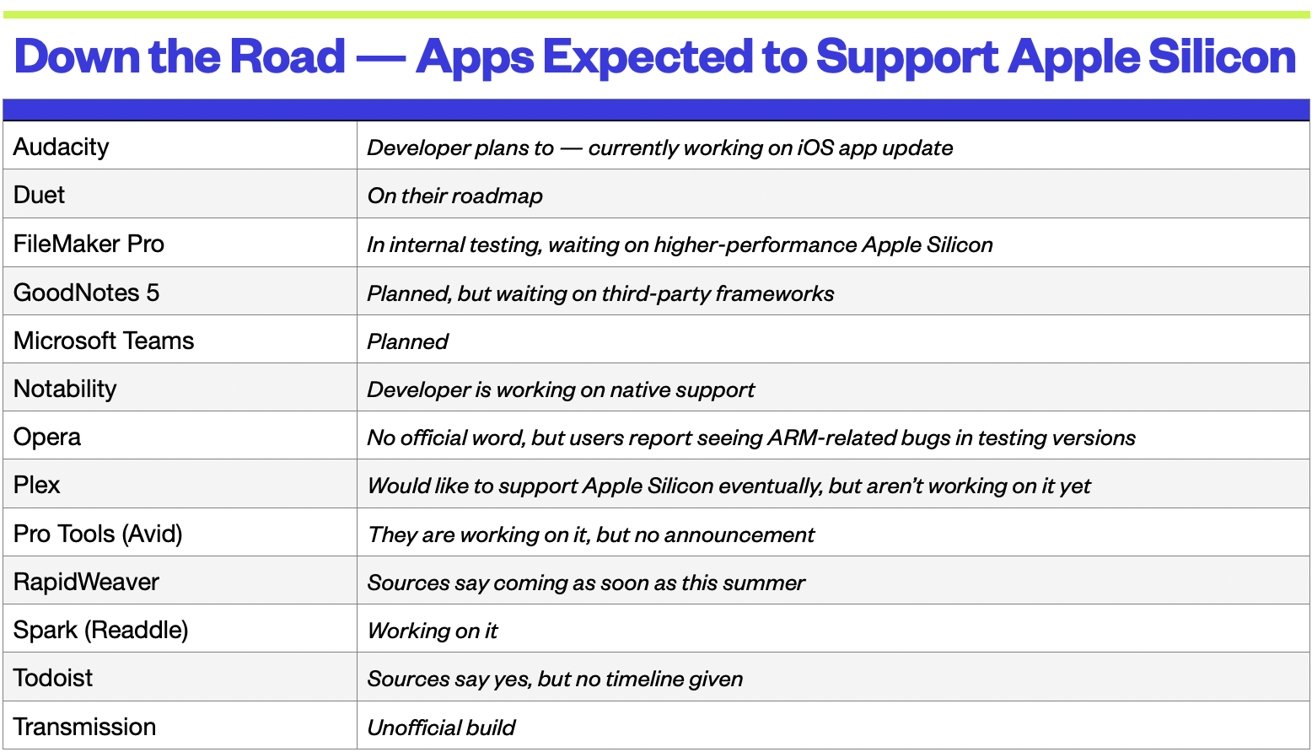 Since we did our last list, there has been some movement. CleanMyMacX and SimpleNote launched support for Apple Silicon in beta. And 1Password went from beta M1 support to public release. But aside from those changes, it’s mostly status quo for apps that still depend on Rosetta 2.

Some developers did signal to AppleInsider that they plan on supporting Apple Silicon in the future, including the makers of Audacity, Duet, and Spark. The developer behind Apple’s own FileMaker Pro has said support is coming, but in a webinar in the fall of 2020 indicated they are waiting to see what kind of performance future “high-end” Apple Silicon chips will offer. Microsoft has also said it is working on a native M1 version of its popular Teams chat client. None of these, however, have launched beta support yet.

Presumably the Covid-19 pandemic plays a part in all of this. For the last 12 months, teams have been working remotely to slow the spread of the deadly coronavirus, which has had an obvious effect on productivity and collaboration.

Even with all of Apple’s excellent tools and developer support, transitioning an app — particularly a massive legacy piece of code — is no simple effort. Now throw working from home into the mix.

Growing pains are inevitable with a platform switch, particularly one as monumental as Apple’s transition from Intel to M1.

But still, it has now been more than three months since the first Apple Silicon Macs shipped, and eight months since the Developer Transition Kit was put in the hands of software makers. The world may have been caught off guard by Covid, but no one was surprised by the debut of the M1.

Apple, frankly, knocked it out of the park with Rosetta 2, seamlessly allow legacy Intel apps to run on its proprietary silicon in a way that most users won’t even notice.

Despite this amazing technical achievement, Rosetta 2 is a bridge, not a destination. Apps must be updated to run natively on Apple Silicon if they are to take full advantage of the performance and power saving benefits of the M1 and its successors.

Apple will also need to push out legacy software and cut dead weight if it wants to successfully keep macOS moving forward. It’s in everyone’s best interest — users, developers, and Apple itself — to have modern Mac apps that run as they should on the platform. 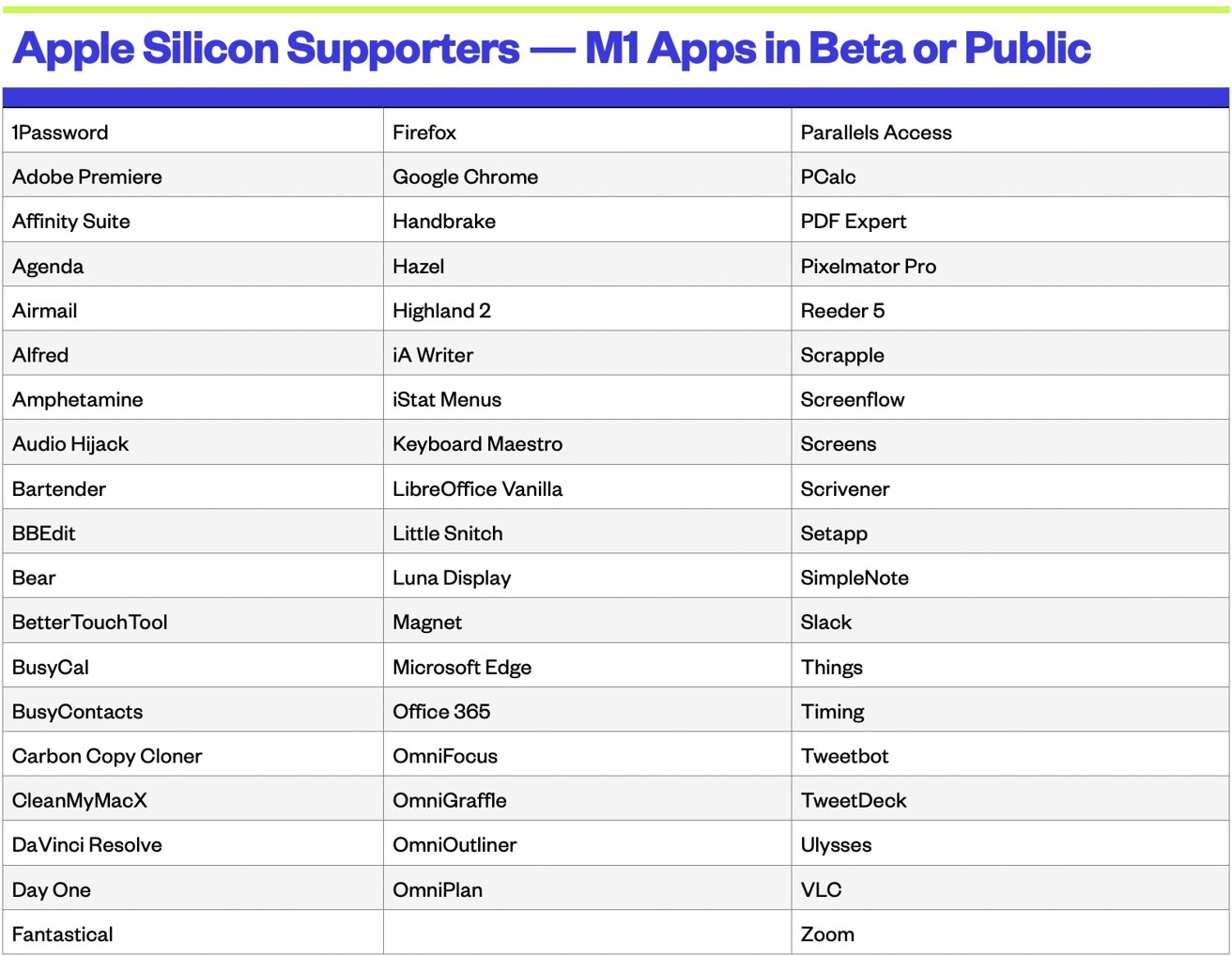 This too shall pass

Unlike Apple’s last major transition, from PowerPC to Intel, the Mac is a much larger and more successful platform than ever. That means there are more developers — creating more complex apps — that must recompile their work natively for a new architecture.

But Apple itself is larger and more successful than ever too, and they’ve used their success and prosperity to the benefit of their development community. Apple’s investment in developer tools has simplified switch to M1, and their wizardry in developing Rosetta 2 means that early adopters of the M1 Mac lineup aren’t left wanting while developers ply their craft.

As the weeks and months pass and many developers say little to nothing publicly about the progress of bringing their apps to the M1 (or not), the responsibility ultimately falls on them. Apple did its work to make this transition as easy as possible.

It’s time for the loyal development community to keep doing their part and make the next-generation Mac experience the best it can possibly be.

William Gallagher contributed to this report.